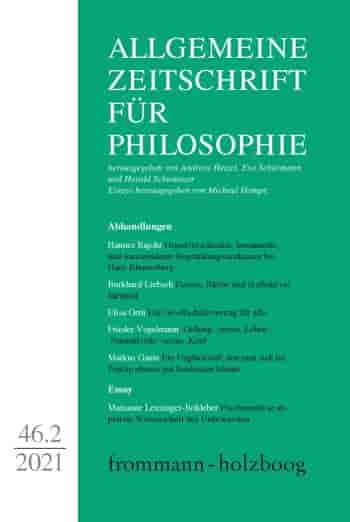 “Validity” versus “Life”, “Normativity” versus “Force”. Genealogy of a Fault Line in (Social) Philosophy [in German]

In this article, three theses are proposed. The first is that “force” and “normativity” are not just two fundamental concepts in (social) philosophy today, but two paradigms: Each claims to structure how we view the world, to name what is specifically human and to determine the task of philosophy. Their confrontation repeats, according to the second thesis, the dispute between neo-Kantian normativism and life-philosophy (Lebensphilosophie) in the 19th century, best captured by the concepts of “life” and “validity.” Third, the differences within this repetition concern the position, status and nature of subjectivity: Whereas theories of validity in the 19th century are at least partially anti-subjectivist, and because of it were accused of being abstract, scholastic and hostile to “life” by life-philosophy, today it is the paradigm of “force” which regards the subject as a contingent result of forces. Against this, contemporary normativism argues for the autonomy of a sovereign subject whose activity is the source of values in this world.