The Genealogy of Normativity

In this research project, I aim to write a genealogy of “normativity,” this “chief term”1 of philosophy. Despite its prominence, there has been remarkably scant research into the history of the distinction that “normativity” marks. If we follow Peter Railton’s exemplary explanation, “normativity” is used “to mark a distinction, not between the good and the bad (or between the right and the wrong, the correct and the incorrect), but rather between the good-or-bad (or right-or-wrong, …), on the one hand, and the actual, possible, or usual, one the other”.2 Hence, the distinction appears to be fundament—yet it does have a surprisingly short history that started in highly specific circumstances in the aftermath of German idealism. In a polemical article, the eminent historian of post-Kantian German Philosophy, Frederick Beiser, has shown that the rigorous distinction between validity/normativity and facticity was especially prominent in the attempts of the “Southwester School” Neo-Kantians Wilhelm Windelband (1848–1915), Heinrich Rickert (1863–1936) and Emil Lask (1875–1915) to give a normative interpretation of German idealism. Beiser argues that their efforts failed on all counts and sees this as a cautionary tale for today:

The many champions of the normative interpretation of German idealism—Henry Allison, Robert Brandom, Robert Pippin, Terry Pinkard, Charles Larmore, to name a few—do not seem to realize that this interpretation is very old, and that it has been worked out before with greater sophistication and subtlety. What is even more troubling, however, is that past labourers in the vineyards of normativity discovered serious problems with this interpretation—problems so deep that they, in good conscience, abandoned it.3

Yet Beiser never develops the history of “normativity” any further. More problematically, he leaves out the founding figure of this distinction and the main adversary against which Windelband, Rickert and Lask deployed it. The “father” of “normativity” is Hermann Lotze (1816–1881) who first argued that “validity” is a distinctive dimension of our reality and who popularized this idea in the 19th century.3 Lotze does not speak of “normativity” but of “validity,” arguing that it is a reality of its own, irreducibly to “being”.4 All proponents of a normative reading of German Idealism refer back to Lotze for support of their presupposition of the distinction marked with “normativity.”

The enemy Beiser fails to mention is the (in)famous “Lebensphilosophie [life-philosophy].” Windelband, Rickert and Lask all engage in the battle between Neo-Kantianism and life-philosophy that dominated the philosophical landscape in Germany during the late 19th century—and they used precisely the concept of “normativity” to argue against what they interpreted as an irrational conflation of normative and empirical claims.

A first aim of my project of writing the genealogy of normativity is to show the role and importance of “normativity” within the philosophical struggle between Neo-Kantianism and the Philosophy of Life. A second aim is to demonstrate the systematic thesis that we witness the reappearance of the struggle between “validity” and “life” in contemporary philosophy with the renewed interest in vitalism (specifically in the tradition from George Canguilhem and Gilles Deleuze to the so-called New Materialists) that is in tension with the dominant paradigm of normativity. However, neither the new vitalism nor the contemporary paradigm of normativity reenacts the struggle from the 19th century unchanged. Perhaps the most important difference is connected to the role of subjectivity: While the 19th century Neo-Kantian doctrine of validity sees the subject as a category subordinated to objective validity, normativity today is understood as being instituted by the subjects.5 And while life-philosophy in the 19th century opposes what they called the Neo-Kantian anti-subjectivism with the foundational role of the “experiencing subject [Erlebnissubjekt]” (Dilthey), today’s new vitalism theorizes the subject as being constituted by alien forces.6

“Validity” versus “Life”, “Normativity” versus “Force”. Genealogy of a Fault Line in (Social) Philosophy [in German]
The Genealogy of Normativity Journal Webseite
In this article, I argue that (a) “force” and “normativity” are two paradigms the confrontation of which (b) repeats the struggle between neo-Kantian Normativism and life-philosophy in the 19th century but (c) changes the role of subjectivity fundamentally.

One Step Forward, Two Steps Back: Idealism in Critical Theory
PDF Concepts of Critique The Genealogy of Normativity Journal Website
The article shows that Amy Allen’s diagnosis of a too idealistic account of reason forms the backbone of her critique of contemporary Frankfurt School critical theory, before it discusses her criteria for an adequate conceptualization of the intertwinement of reason and power. 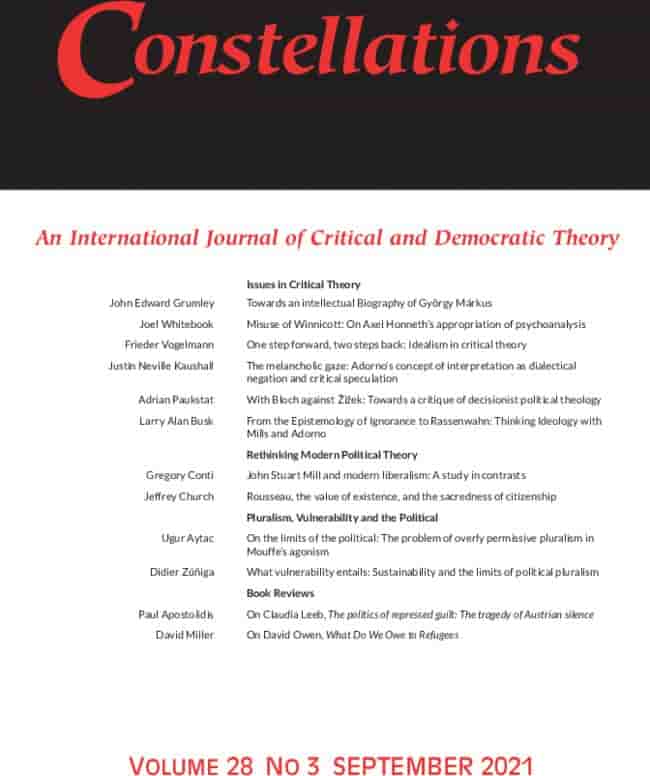 One Step Forwards, Two Steps Back: Critical Theory’s Progress
Concepts of Critique The Genealogy of Normativity
The talk is part of the conference The Concept of Progress at the University of Bremen, organized by Martin Saar, Frank Nullmeier, Martin Nonhoff and Frieder Vogelmann.
15 November 2019 — 16 November 2019 SOCIUM, Bremen University