This research project combines the critique of contemporary neoliberal practices of governing raised by governmentality studies with a critical reading of the history of political thought (especially of political liberalism, broadly construed). The aim is to analyze possibilities for alternative governmentalities by picking up a surprisingly conventional challenge by Michel Foucault. After visiting prisons and work camps in the USSR in 1976, he argued that we need more political imagination to invent new practices of governing that would neither follow a liberal nor a bureaucratic-totalitarian rationality. The task would be to “to invent a way in which power can be exercised without instilling fear,”1 Foucault argued. “That would be a true innovation.”

The task is conventional because it merely repeats the question that political liberalism has answered again and again in the last 200 years. Yet we can still use the question, on the one hand, as a criterion to demonstrate that political liberalism has failed to provide an adequate solution. On the other hand, we can also use question as a criterion to judge real existing experiments with alternative political rationalities. The aim of the project is to bring together, step by step, elements of an alternative governmentality.

The first task of the research project is therefore to re-read the history of political liberalism as an attempt to answer the question how to govern so that those governed need not fear those governing. This answer has two parts that together make up the concept of “autonomy.” Those governed need not fear those governing because liberal governmental practices are based, first, on self-government (auto) and, second, on the rule of law, not of men. These two parts, fused in “autonomy,” are said to guarantee a way of exercising power that those whom power is exercised over need not fear because they are ruled neither arbitrary (but by law) nor by strangers (but by themselves).

Of course, the critique of political liberalism has targeted both parts of this answer. In case of the “rule of law,” the critique of rights has demonstrated forcefully that the law does not only make use of the fear of punishment (a point political liberalism would never dispute but justify) but also gives birth to new forms of fear of the violence within the law.2 In case of the idea, dating back to Rousseau, that those are free who only have to obey themselves,3 the problems are both conceptual and empirical. Conceptually, it is the paradox of autonomy – of making the law that one has to obey – that haunts the liberal solution: either the law really is self-given yet then it is not binding, as I can make a new law anytime, or the law is binding because I do not have this option but then it is not really self-given.4 Empirically, the idea to secure freedom through self-government is under pressure given the complex and highly indirect form of self-government in modern democracies.

We therefore have, on the one hand, convincing reasons to suggest that political liberalism does not have a solution to the problem how to govern without instilling fear in those governed. Yet on the other hand, we cannot deny that the critics of liberalism – be they Marxist or anarchist – have demonstrated convincing alternatives. However, they fare much better then often assumed once we take into account that liberalism does not offer a convincing answer to our question. Whereas this first part makes room for the idea that we still need to discover how to govern without instilling fear in those being governed, the second part of the project assesses alternative political experiments to see wat we can learn from them. In order to do so, I plan to proceed similarly to Erik Olin Wright in Envisioning Real Utopias,5 by first analyzing the real existing political experiments with governmental practices beyond the liberal principle of autonomy. These experiments will be judged according to the criterion whether they exercise power in a way to those governed need not fear those governing. The hope is to find at least some elements from which we can then construct an outline of an alternative governmentality.

»Autonomie« als Prinzip politischer Rationalität: Eine Blockade unserer politischen Vorstellungskraft?
Alternative Govern­mentalities Publisher's Website
Is it possible that the concept of “autonomy,” as an unquestioned cornerstone of political rationality, has turned into an obstacle for our political imagination? 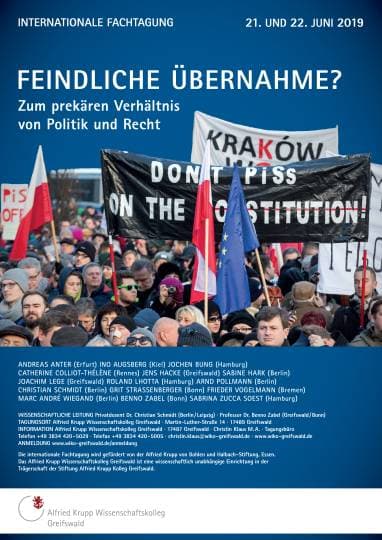 To Be Governed Without Fear: Does “Autonomy” Obstruct Our Political Imagination?
Alternative Govern­mentalities
How can we govern so that those governed need not fear those governing? And what if the familiar answer of political liberalism, namely “autonomy,” turns out not to meet this criterion?
19 June 2019 17:00 — 19:00 Brighton, UK