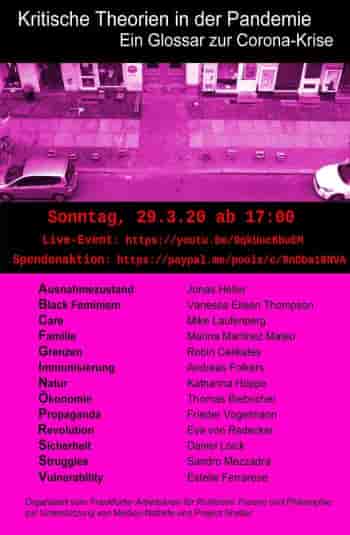 Critical Theories in the Pandemic: A Glossary – Online Fundraiser

How to do critical theory in a pandemic? We cannot present a stable analysis of an unfolding disaster, and yet we cannot remain silent either, given how covid-19 interacts with multiple existing crises and aggravates them. One such catastrophic dimension is the situation on the Greek islands at the European border, where overcrowded refugee camps are threatened by aggressive border police and fascist gangs, as well as the outbreak of the virus.

As the Frankfurter Arbeitskreis – a network of German philosophers, sociologists and political theorists connected through a long-standing reading group –, we have started to assemble a constellation of concepts which allow us to think through the current moment.

The resulting “Corona Glossary” is presented in short talks on YouTube connected with a very practical aim: to raise money for two initiatives which support migrants in their vital needs and political struggles: Project Shelter, a local charity from Frankfurt, and Medico International, an organization which promotes the human right to health in cooperation with many left-wing political forces around the globe.

Donations could be made via PayPal until April, 4th, and subsequently via the donation links of Project Shelter and Medico International.

If you want the Poster to promote the event, download it here as a PDF.